This article focuses not on the imperative of having great investments—that message is easy and low hanging fruit.  The message instead is that over my years we’ve come to understand that investments are actually secondary to the greatest problem investors have: reacting emotionally to markets and not intellectually.

Take a look at the almost perfectly juxtaposed graphs embedded below.  They represent; 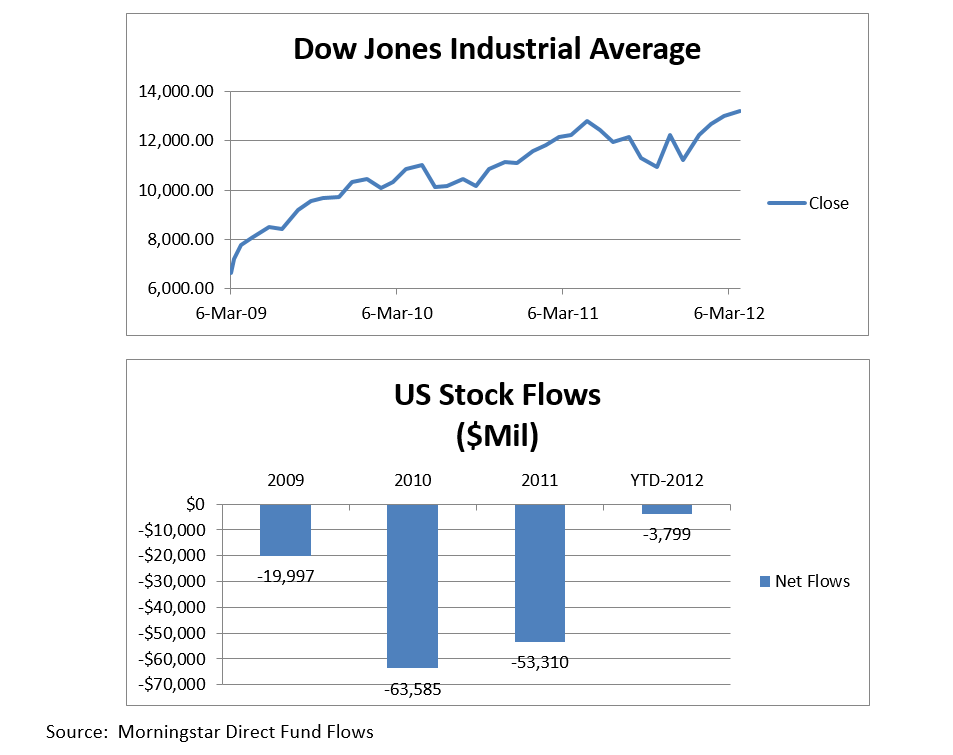 The loss to investors represented by the opportunity cost of being on the sidelines for the last 5 years totals lost profits of $106,000,000,000.[i]  That’s a very big number.  What propelled it?  In large part it was due to market pundits who forecast the direction of the market, such as on October 3, 2011 when stock prices hit bottom for the last year.  A Wall Street Journal article cited a number of individual investors as well as professional advisors who had recently sold all their stocks and did not expect to repurchase them anytime soon. “I feel like a deer in the headlights,” said one.

What’s the antidote to such constantly repeated self-inflicted financial mutilation?  The answer is a plan…a comprehensive well-thought out financial plan.  Done correctly the plan limits the amount of risk an investor puts into his / her portfolio, and guides him when the market forces of greed and fear dominate the less educated or less disciplined investor.  Three notable experts on life and investing are quoted below and affirm their belief of this concept;

One of our favorite men was Ben Franklin, and he said “”By failing to prepare, you are preparing to fail.”

Benjamin Graham, arguably one of the greatest investors of all time said; “The investor’s chief problem – and even his worst enemy – is likely to be himself”.

The last comment comes from David Booth, Co-founder of Dimensional Fund Advisors, who more recently contributed $300 million to the University of Chicago who said;

“The important thing about an investment philosophy is that you have one”.

We don’t know if most of you even own a cowboy hat, but we do know this; you have a solid plan and it has worked to let you participate in the best six month market rally since 1991.