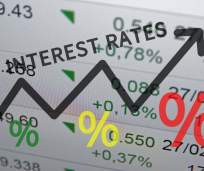 The federal funds rate is the interest rate at which banks lend funds to each other from their deposits at the Federal Reserve (the Fed), usually overnight, in order to meet federally mandated reserve requirements. Basically, if a bank is unable to meet its reserve requirements at the end of the day, it borrows money from a bank with extra reserves. The federal funds rate is what banks charge each other for overnight loans. This rate is referred to as the federal funds effective rate and is negotiated between borrowing and lending banks.

The Federal Open Market Committee sets a target for the federal funds rate. The Fed does not directly control consumer savings or credit rates directly; it can’t require that banks use the federal funds rate for loans. Instead, the Fed lowers the federal funds rate by buying government-backed securities (usually U.S. Treasuries) from banks, which adds to the banks’ reserves. Having excess reserves, banks will lower their lending rates for overnight loans in order to make some interest on the excess reserves. To raise rates, the Fed sells securities to banks, decreasing the banks’ reserves. If enough banks need to borrow to meet overnight reserve requirements, banks with extra reserves will raise their lending rates.

The FDIC insures CDs and bank savings accounts, which generally provide a fixed rate of return, up to $250,000 per depositor, per insured institution. The principal value of bonds may fluctuate with market conditions. Bonds redeemed prior to maturity may be worth more or less than their original cost. Investments seeking to achieve higher yields also involve a higher degree of risk. U.S. Treasury securities are backed by the full faith and credit of the U.S. government as to the timely payment of principal and interest.